This is a quick blog article which shows one "Montgomery of Alamein" from Eagle Vol. 13 No. 16 - dated 21 April 1962 as reprinted in Action, an infamous comic published in the UK beginning 14 February 1976 (until 12 November 1977, with annuals continuing until Action Annual 1985!). It was Richard Sheaf and Paul Trimble who alerted me to this, for which I thank them. As Richard stated "you'll see that the images has been 'squashed' slightly for the Action cover. The tank wheels in both images are identical and the explosion is very much in the Bellamy style. In fact it was the explosion style tipped me off that this was Bellamy more than the tank wheels! Once I knew it was Bellamy that helped me narrow it down". 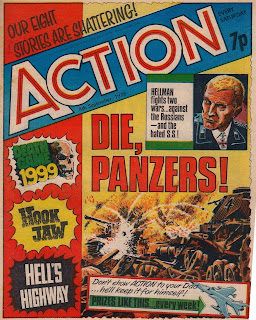 If you want to see all the (idetified so far) reprinted Bellamy artwork in Action and its later incarnation Battle Action, read my previous article